To celebrate Pi-day, today’s experiment is regarding pie. There are many investigations we can do with pie, but for today we chose to examine the value of making crust from scratch, versus buying a pre-made pie crust.

Background:
I have never had a problem creating pie crust from scratch, but I do occasionally get lazy and just buy the varieties available in the refrigerator section of the local supermarket. Since I generally never make two pies at the same time, but if I happen to (…Thanksgiving…) they are made in the same manner, I have never directly compared homemade crust and store bought crust. Pi-day was also approaching, so we wanted to test something regarding pie.

Question:
Assuming you place value to your time, what are the relative costs associated with making a pie crust from scratch, versus buying pre-made crust? Are the resulting crust qualities different enough to warrant either the extra time, or the extra direct cost, of the two options?

I expect the crusts to be different due to the varying techniques and ingredients available to the home cook and the industrialized pastry producers of America. However, I am unsure going into this, how the relative costs will compare. I am assuming that readers have basic cooking knowledge (or that, if you don’t you would look elsewhere for that knowledge), so details of pie construction are NOT covered below. Watch ‘Good Eats’ if needed. 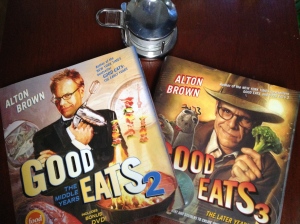 Reference material used for Pie making, I got the Snazzy salt server

It took me 45 minutes to construct the pie crust, however, this is considered to be a near “worse case” scenario (see next section for a description why). Note that, “worse case” is different from a “catastrophic” scenario.

For the moment, we will just examine cost.

If you do not value your time; (Ingredient only cost comparison)

If you place value on your time; 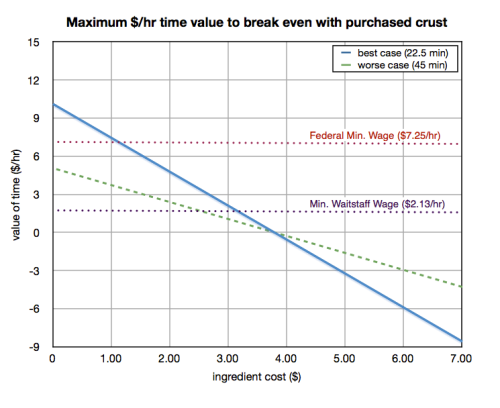 The maximum $/hr value that can be assigned to your time, based on initial value of ingredients, in order match the cost of a purchased crust. Federal minimum wage and min. wage for waitstaff are shown for comparison. Lines cross $0/hr at $3.79 ingredient cost, which is the cost of a store bought crust in our scenario.

As all the ingredients that go into pie crust are pretty stable ingredients, it is likely that any material that is unused for the crust will eventually be used in other applications. As such, if we assume the best cost scenario ($1.52/double pie crust) is most applicable in the long run

The above does not take into account the most important aspect of this entire thing: is a homemade crust identifiably “better” than a purchased crust? It may be okay if a homemade crust is more expensive than a store bought crust if it is more enjoyable. I know I would pay more for a fresh bakery cupcake made with normal ingredients than I would for a Twinkie (especially since the rationing scare is over).

Table 1: $/hr value that can be assigned to your time based on crust construction speed, ingredient value (no perceived value, or calculated cost of 1 double crust), and qualitative difference between homemade and store bought crust. People who value their time more highly might still be able to justify the time to construct a pie crust from scratch if they were speedy and the result was considered significantly better than the store bought crust. The “neutral” case is if you consider the crust you make to be equivalent to the store bought crust.

Pie 1 (left; 2 cinnamon sticks): there was an obvious color difference, and this crust was more pale than Pie 2. The crust was flakey, buttery, and the bottom crust held up well to the excess fluid (my timing was off, so the pies only rested for 1 hour). The bottom crust was nicely flavored by the pie juices, but was not soggy.

Pie 2 (right, 1 cinnamon stick): Crust was must darker in color, and very thin. This crust was considered more tender, and less flakey, than Pie 1.

This was supposed to be a post on pie crust, and I did everything in my power to make sure the filling would be identical between the two pies. The filling was doubled and mixed in one large vessel. The filling was dispensed in alternating scoops into the two crusts; one scoop here, one scoop there, repeat. Juices at the bottom of the vessel were divided equally between the two pies.  Both pies were placed in the oven at the same time, swapped positions half way through baking, and pulled from the oven at the same time.

Despite that control, the filling in the two pies was significantly different!

Pie 1,  was preferred by the 3 pie eaters. The crust was more flavorful and distinct from the filling.
Guest taste-tester, ‘K’, “liked Pie #1, I’m not normally a fan of crust, but finished it all, so something must have been going for it”

Pie 2,  having a very thin crust, resulted in less distinction between shell and pie innards, leading to the commentary “I am a thing that holds filling”. My-coblogger enjoyed the mouthfeel of the filling in Pie 2 better (likely due to the extra gelling that had occurred), but the crust itself had a “barely there” presence.

#1: The most important possible outcome from this test is that the pie crust may play a significant role in the baking process of the pie! Substituting a store-bought crust for a homemade crust (or vice versa) may have a direct influence on that qualities on the pie filling. The store-bought crust in this case was thinner, which we believe allowed the filling to get hotter. This will alter the chemical reactions going on in the filling, producing softer apples and more gelling, than seen in the pie with the thicker, homemade crust. We hope to test this in the future.

The time I spent in making crust in this case, was considered a “worst case” scenario due to the following issues: this was my first time using Alton’s recipe, so the reading/digesting of instructions part slowed me down, I learned that a blender with a food processor attachment is not sufficient for his instructions, and I initially forgot to double the amounts of lard and water (I noticed something was wrong before the resting stage), so I had to add more ingredients and remix. Someone experienced with this recipe would be able to concoct this correctly in, probably, a 1/3 to 1/2 the time, thus the “22.5 minutes” estimate for the best case time.

In comparison with the federal minimum wage ($7.25/hr), when making a pie crust from scratch, you can only value your time at a higher rate if you are (1) fast, and (2) place a low value on your ingredients (less than $1.07). If however, you are one of the many tipped waitstaff in the country, who might be paid as little as $2.13/hr, in the best-case time scenario you come out ahead if your ingredients have less than a $3/value.

The situation for the homemade pie is better (see Table 1) when you consider that it was the preferred crust in our tasting. If you think your homemade pie crust is better than the store bought variety, the time you spend on the effort can have a relatively high perceived value, which in the end can make it a worthwhile endeavor. 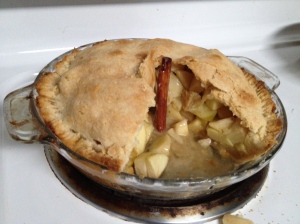 How do the insulative properties of different types of pie crusts differ?
What apple variety is the best for pie?
I’ve heard some regions make apple pie with vanilla instead of cinnamon/nutmeg. How do these two takes on apple pie compare?
Are fancier crusts, like Alton’s recipe that uses Apple Jack, worth the cost of exotic ingredient plus the effort required?
Test the relative effects of using different pie crust fats (including home-rendered animal fats, like my grandma would have done).