It is summer, and warm temperatures come with warnings about the dangers of parked cars and how quickly they heat up.

What are the heating curves for a parked car, on a warm & sunny day?

It is expected that the completely closed car will heat up faster than an open car, which in turn should heat faster than a car parked in shade. However, it is unknown how hot the maximums will be. Qualitatively, it is known that entering a closed parked car can be quite unpleasant, especially since the Primary Testing Facility’s chariot has black leather seats.

The Primary Testing Facility’s chariot has a dark burgundy (“wine”) paint, and an internal volume of 91.4 cubic ft. The interior is black leather (not our first choice, it was purchased used…).

Temperature versus time data were plotted to obtain the figure below: 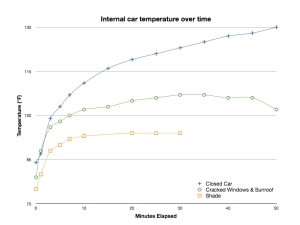 Heating curves for the air inside a parked car under different conditions.

The initial environmental air temperature in all tests was 84°F. For the car parked in the shade, the immediate surrounding temperature was measured at 79°F, but atmospheric temperature where the sunny trials were held was still 84°F . The temperature difference between the shaded under-parking structure vs. our standard parking area, could be due to proximity to a water body. The shaded region utilized for this experiment was closer to a waterway than our normal parking plot.

The dip seen at the end of the open-window trial was caused by a transient cloud. Otherwise, the trial periods were relatively consistently sunny.

A closed car, parked in the sun, rises in temperature very quickly. Most people who own cars would find that qualitative statement obvious, however, the fact that temperatures breach 100°F in a closed car in under 5 minutes is pretty impressive. Here at the primary testing facility, we cook our steaks to 125°F. The closed car hit that at 35 minutes.

While the open window car did not get above 110°F, it did hit 100°F in 7 minutes; not too much different than the completely closed car. Given that heat stroke occurs in Humans when body temperature is driven over 104°F, and dogs when their body temps hit 109°F, environmental conditions in parked cars do get dangerously hot very quickly. An article about dogs claims that “On an 85-degree day it takes only 10 minutes for the interior of your parked car to climb to 102 degrees. In a half hour, it can reach 120 degrees.” In our trials, the parked & closed car had reached 111°F in 10 minutes, and was over 120°F in 30 minutes. While the quoted 102°F was spot on for our open car trial at 10 minutes, with the windows open, the car did not get above 107°F during the recording period. However, considering that dogs do not sweat, and generally rely on the environment being cooler than their internal temperature to cool off via panting, 107°F would still be dangerous for an animal who’s normal body temp is generally under 102°F.

How does car color or internal car volume affect the heating curves?
How does dappled shade (i.e. under a tree) compare to complete shade?
How does relative humidity affect the results? (water is a powerful component of the greenhouse effect.)

….can you can you cook a steak via the sous vide method in a closed car on a sunny day?

One thought on “on the Heating of Parked Cars”