In honor of the 21st amendment, without which many of the experiments we have conducted thus far would be illegal, we decided to perform an experiment involving Gin, the most popular liquor during prohibition.

Initial observation:
There are a variety of glasses available that are intended keep beverages cold.  Since we happen to have several such glasses in shot glass sizes, we figured we’d put them all to the test and see which one works best.

Question:
Since many liquors such as gin are typically consumed ice cold, how much does the type of glass affect the rate at which liquor warms?  As a control we will use two standard glass shot glasses, one stored in the freezer and one at room temperature.

Before starting, the elaborate temperature probe stand was assembled using a 17 fl. oz. glass and the binder clip. 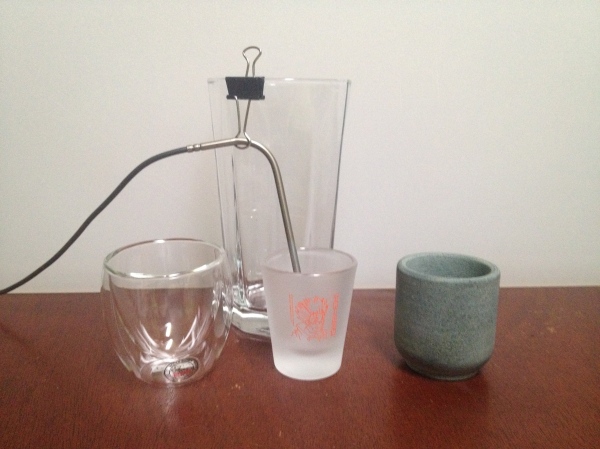 Temperature probe mounting mechanism along with 3 of the 4 shot glasses used.

Since we only had one temperature probe, each glass was tested individually.  During each trial the gin was returned to the freezer, to try to keep the initial temperature as consistent as possible.  Temperature measurements were logged automatically every half second.  The following graph shows the 5 second averages of the temperatures as the gin warmed in each glass. 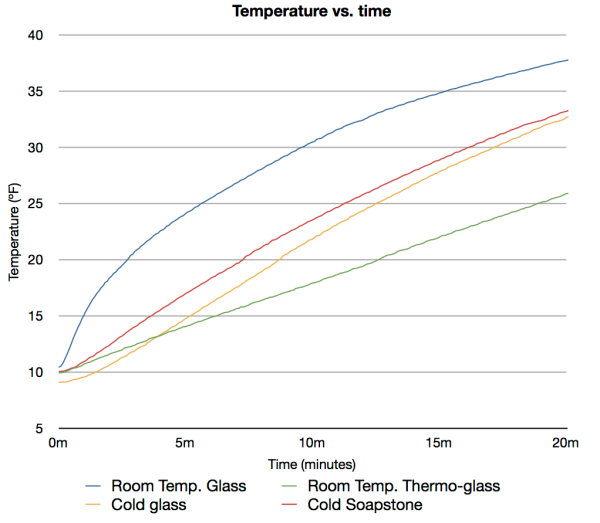 Temperature of gin over time in various shot glasses.

The clear winner is the thermo-glass shot glass which started at room temperature and was the only one to still have the gin below 32ºF after 20 minutes.

Surprise Results:
The cold glass shot glass was nearly identical to the specially made soapstone.

Conclusion:
The thermo-glass managed to keep the gin much cooler than any of the others.  The ice cold soapstone and glass were about even with the room temperature glass shot glass doing the worst of all of them.

Future Questions:
This experiment was carried out using shot glasses.  How would results differ with cocktail glasses that one would drink a martini out of.