Here at the primary testing facility, we recently acquired our first sous vide immersion circulator. Since this is a novel cooking technique for us we have many questions. In this post we seek to find out how important searing really is when cooking steaks?

Initial observation:
It is a commonly accepted practice to always get a good sear on certain cuts of meat.  Some slow cooker

cookbooks recommend searing meat before cooking it low and slow for many hours.  As most food geeks, and any fan of Alton Brown knows, the main purpose of searing is to improve the flavor of the meat through the Maillard reaction, and has nothing to do with sealing in juices. Since this reaction only occurs at very high temperatures, sous vide recipes often call for the meat to be seared before serving.

Question:
Is searing more than just cosmetic, or is a good steak really all about being properly cooked on the inside?

Expectation:
Given the importance placed on using high heat when cooking burgers and rib-eyes, searing seems like it is an important step.  However given how delicious prime-rib can be while only having a crust around the very edge, unseared meat should also be quite tasty.

Data:
We had fully intended to track the temperature of the water over time during the experiment, however changes to the iCelsius

software used coupled with user error prevented that from happening.

Before cooking, both steaks were placed into their own zip-top bags. 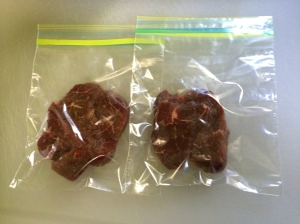 Raw steaks bagged and sealed, ready for the water.

Sous vide rig with the water at a steady 130.0ºF, ready for the meat to be added.

After 40 minutes in the water bath, the steaks should both fully cooked to medium-rare. Unfortunately one of them was considerably thinker than we thought, and only got to 121.2ºF internally. This wasn’t noticed until after the searing of the other steak had been completed. The seared steak had an internal temperature of 135.6ºF after searing. 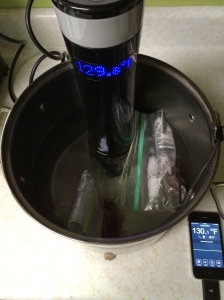 After about 40 minutes, the steaks should be fully cooked.

Once the steaks were full cooked they were removed from the water bath.

During cooking a fair amount of juice escaped from the meat.

When taken out of the bags they had the pink color that is expected in the inside of a medium-rare steak. They even had a nice beefy aroma, but looked quite odd with pink exteriors, a bit like pink silly putty.

After cooking the meat was certainly the nice pink color associated a properly cooked steak.

One of the steaks was then seared in a hot cast iron skillet for 30 seconds on each side.

After searing one steak (left) for 30 seconds on each side on a hot cast iron skillet. The other steak (right) was left unseared.

Once one of the steaks was seared, they were cut in half to show the cross-section.

The final product cut in half to show cross-section. Both steaks are evenly done all the way through, with the seared steak having the familiar brownish color on the surface. The black flecks are bits of carbon liberated from the skillet by the tongs, oops!

The steaks were then tasted by myself and Brownie Master P.

While both steaks were good and if presented by themselves would each be excellent, albeit a little weird in the case of the unseared steak, the seared steak was the clear winner.

Surprise Results:
The amount of fluid that leaked out of the meat during cooking was a bit surprising. Unfortunately the amount of fluid lost wasn’t quantified. Also, the smell of the meat when it came out of the zip-top bags was a bit startling. Normally when cooking, you can slowly start to smell the meat as it cooks, but with sous vide you don’t get any indication of cooking until you open the bag and encounter the familiar aroma of cooked meat.

Future Questions:
Is it better to sear before or after cooking? What is the optimal amount of time to get a good sear? When is the best time to season the meat? How much mass is lost during cooking? How does that compare to other cooking methods such as grilling or pan searing? How much does the searing affect the final internal temperature of the meat? How much electricity is actually used? Would an insulated or cast iron pot affect the amount of electricity used. Can less expensive cuts of meat such as chuck tenders be used as a cost effective alternative to more expensive steaks? If you’re cooking a frozen steak, can you thaw it and cook it directly via sous vide? Will we get tired of steak before we finish answering all of these questions?

One thought on “On the importance of searing steaks”