A news item popped up today about how alcohol conglomerate Diageo would be offering nutritional information. However, a little bit of cognitive dissonance set in after reading this sentence “And a 12 oz serving of Guinness — often referred to as a meal in a glass for good reason — clocks in at an eye-opening 678 calories.”

Doing a search for “Guinness calories” brings up this:

Another piece of evidence indicates Guinness has 125 calories.

which is way more in-line with what was expected, and agrees with what the can actually says.

Searching for “a 12 oz serving of Guinness 678 calories” mostly just brings up copies of the same article that started this quest.

It wasn’t until a recipe for an Irish Car Bomb scrolled by that the mental circuit clicked.

The plot thickens…. with units.

The US is a bit weird in that we measure nutritional energy in “large calories“, which equal 1000 calories as introduced in High School Chemistry/Physics. A single large calorie could raise 1 kilogram of water 1°C, rather than a single “small calorie” which is the energy needed to raise 1 g of water 1° C.

Essentially none of our food labels include the official SI unit of kJ, but this is actually the standard for food labels in much of the world. In any event, 1 kcal = 4.184 kJ. Doing the unit conversion, 125 calories = 523 kJ. This is certainly closer to the “shocking” number thrown about in that article, but Guinness is also a line of beers; can we find an exact match for this errant number?

Off to Diageo’s website to see what might be going on! Clicking through the various entries for Guinness, we can see the following stats: 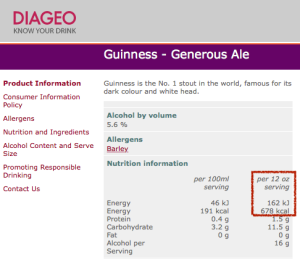 Found it! also… that’s not right.

Given that there should be over 4 kJ for each kcal, the above numbers make no sense unless the units had been swapped; e.g.

the two numbers given *only* work if we swap the units

Conclusions: Go ahead and drink your Guinness, and please take home an important lesson about units.

“Guinness Generous Ale” Diageo. Accessed March 21, 2015. < http://www.knowyourdiageodrink.com/en-row/pages/SearchResults.aspx?BrandId=5088&VariantId=25017 > NOTE: you may have to visit the Diageo Search Page before the link will work.

One thought on “Units Matter”