As we have previously mentioned, buying frozen steaks can be much less expensive than buying fresh steaks, and the quality was nearly indistinguishable, based on our previous experiment. However neither steak in that experiment was as good as a decent rib-eye should be. There was also a serious lack of control in that experiment with regards to the starting quality of each steak. In this study we examine the effects of freezing a steak starting from two steaks that are nearly identical.  The goal is to see if it makes sense to stock up on steaks when they are on sale and freeze them, or is it better to simply wait until they are on sale to enjoy them.

Initial observation:
Periodically, otherwise very expensive cuts of meat such as rib-eye steaks are available for greatly reduced prices.  Recently, rib-eyes which are normally $11.99/lb. were available for $6.99/lb. (41.7% off).

Question:
Does it make sense to stock up on rib-eye steaks when they are on sale, then freeze them to be consumed later, or does freezing damage the steaks too much?

Expectation:
Based on a previous experiment, there was little to no difference between fresh and frozen steaks, however in that experiment both steaks were less than spectacular, calling into question the original quality of both steaks. In this experiment we’re starting with two fresh steaks from a source we expect will be of higher quality. Since we’ll be starting with higher quality meat, we expect to see a greater difference. In particular, we expect the frozen steak to suffer more cellular damage and therefore lose more mass during cooking, possibly leading to tougher meat.

Each steak was massed then placed into a zip-top bag for storage. The masses and storage method were written on the bags. Below are pictures of the steaks at each phase of the freezing/thawing process. The upper left image is before one of the steaks was frozen. The upper right is the next image which shows the steaks after one had been thoroughly frozen. The lower left, shows both steaks after the frozen one had thawed in a water bath.  To ensure that both steaks started at the same temperature for cooking, the non-frozen steak was also placed into the water bath during the thawing process. This turned out to be a non-issue however as the cooking was delayed until the next day and both steaks were placed in the refrigerator over night. The final picture  in the lower right is the steaks after they both spent another night in the refrigerator, and was taken shortly before they were cooked. 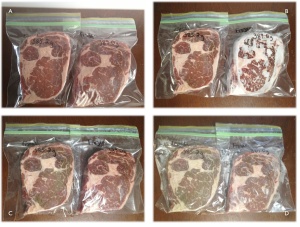 For comparison, photos of the steaks before and after they went into storage for a couple days were taken. The steak that was not frozen is noticeably browner than the steak that was frozen. This differs from previous observations in which frozen steaks were thought to be browner than fresh. So, we surmise that the steaks that can be purchased frozen were turning brown before they were frozen. This is further bolstered by the vacuum sealed beef we’ve had in our freezer for months that is still very red.

Once the steaks were cooked, they were both sliced in half to examine their cross sections as show below. There was little different between the steaks in terms of color or doneness.

At several stages during the storage and cooking process the mass of each steak was recorded. The table below gives both the raw values and percentage of mass lost. In the prepped stage, both steaks gained a slight amount of mass due to the addition of canola oil and salt.

When graphed the masses of the steaks follow very similar trends. A slight loss in mass during storage, followed by an increase during preparation due to the addition of oil, then a significant loss during cooking. 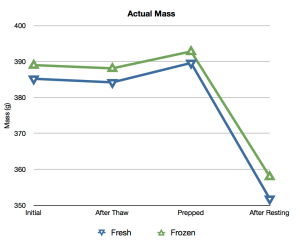 Steak masses over the course of the experiment.

When the loss is taken as a percentage of the original mass of each steak, the results are somewhat surprising. The mass lost during storage is nearly identical, as is the gain during preparation. However the fresh steak loses more mass during cooking than the frozen one. This is the opposite of what was expected. 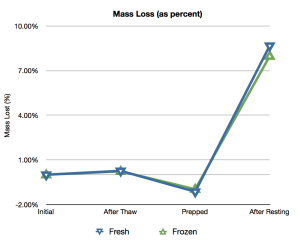 Percentage of mass lost over the course of the experiment.

When the steaks were tasted, both had nearly identical texture and juiciness. The only major difference was the flavor. The fresh steak had a much stronger beefy flavor than the frozen one. More science will need to be done to determine the cause of this difference. Both steaks were very enjoyable, and far superior to the steaks in the previous fresh versus frozen study.

Surprise Results:
Despite asking Brownie-Master P and Taste-Tester K over to help taste test, both declined, leading to left overs. Also the improved flavour of the fresh steak was much greater than expected. The fact that the fresh steak losing a larger percentage mass was also surprising.

Conclusion:
The difference in mass loss was very small between the two steaks was very small, in fact the frozen steak, which was expected to lose more mass actually lost less mass during cooking. Both steaks had nearly identical textures, however the fresh steak did have a more pronounced beefy flavor. Both steaks were very good, and only had a slight difference in flavor. So at least for short periods of time, there is little difference between freezing steaks and keeping them in the refrigerator, indicating that the process of freezing and thawing alone does not significantly alter the steaks.

Future Questions:
If the frozen steak is going to be stored for a long period time, is a zip-top bag sufficient protection, or is additional protection such as aluminium foil needed? Does moving the steaks from their original packaging to zip-top bags affect on final results? How would either of these techniques fare against proper dry aging? In this case we rested the steaks on a cooling rack above a plate, does this significantly affect the mass loss during resting?