Orange liqueurs are reported to have differing properties, but tend to be similar enough to only require a single bottle per collection. The collection at the Secondary Testing Facility recently had its bottle of Grand Marnier supplemented with a bottle of Cointreau, adding comparative liqueurs to our potential fields of study. For our first foray into the realm of citrusy alcohol science, we consider a simple question: which produces a better brownie, Grand Marnier or Cointreau?

Things chocolatey are well known to go with things orangey, leading to the existence of recipes like chocolate orange brownies. This particular recipe calls for Grand Marnier – a cognac-based orange liqueur – in addition to some orange zest as its primary orange flavor. So, if one variety of orange liqueur makes a good brownie, what would happen if we used a different variety?

Given the reported differences between Grand Marnier and Cointreau, will substituting one for the other in brownies make a noticeable difference? If so, which variety of brownie is preferred?

Grand Marnier has been described as “creamy”, while Cointreau tends to be referred to as “clean” or even “bright”. In light of this, I expect brownies produced with the liqueurs to be noticeably different, with the creaminess of Grand Marnier producing the better brownie.

I do not expect the point of addition for the liqueur to make a significant difference.

Upon removing the brownies from the oven, we discovered that the half batch with orange liqueur added at the normal time was noticeably darker in color than the late-addition half. This was the case for both the Grand Marnier and Cointreau brownies. 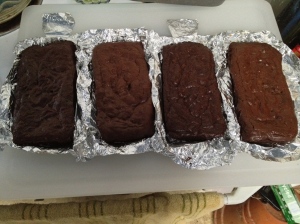 During brownie construction, we had one person mix the normal brownies while another mixed the late addition demi-batch. Unfortunately, we only realized after the Cointreau batch was mixed that we had forgotten to switch who mixed which demi-batch. That being the case, we do not know if the coloration difference is due to changing when the liqueur was added, or a function of mixing technique.

A total of four tasters (myself included) were called upon to sample the completed brownies. All reported a noticeable difference between the Grand Marnier and Cointreau brownies, as well as a difference between the normal and late addition. Texturally, the normal addition brownies were slightly more dense, while the late addition brownies were slightly airier.

Surprisingly, all four tasters preferred the Cointreau-based brownies to the versions using the Grand Marnier specified by the recipe. The general sentiment was that none of the varieties would be turned away, but the Cointreau brownies (especially with late addition of the liqueur) were the most pleasing. This is a complete reversal of my initial expectations.

In conclusion, varying the type of orange liqueur used in brownies can make a noticeable difference in the flavor of the brownies, with Cointreau being preferred to Grand Marnier in our testing. However, both liqueurs produce tasty brownies, so it is safe to use whichever is on-hand, rather than needing to procure a bottle solely for making brownies. (The brownies are probably good enough to merit buying one or the other if orange liqueur isn’t already available, though.)

While there was a noticeable difference between brownies made according to the recipe and those in which the orange liqueur was added later, we cannot determine whether the difference is a function of the addition time or technique differences.

The issue of technique’s effect on brownie characteristics merits further study. Textural differences would indicate that additional air was incorporated into the late addition batches, but we did nothing to account for that in our initial testing. We could conceivably control for technique issues by trading off mixing responsibilities, having a single person mix both batches of brownies, or both.

An additional question, posed after the initial experiment, is how much orange flavor is actually provided by the orange liqueur, as opposed to the orange zest. This could be easily tested by producing brownies containing only the liqueur or only the zest, and comparing the results.

47 thoughts on “Orange Liqueur versus the Brownies”