As co-blogger and partner in life and science likes to point out, I do not seem to belong to modern American culture… thus, there was a slight disagreement as to when these egg events would take place. On Easter Sunday seemed perfectly reasonable to me, but then again, egg-hiding was never a part of my childhood, so why not color eggs on Sunday? ANYWAY… last year generated a couple questions and we wanted to re-examine those. Granted, there is no reason why we couldn’t dye eggs at any other point during the year, but life gets in the way and having a firm date for a related holiday provides good impetus.

Q1: Can baked eggs be improved? Last time they ended up like little overcooked death-stars, which we suspected was due to contact with the unrelenting conduction at a single point where the eggs rested on the muffin tin. Thus, today are attempting the baking method again via two methods: A. place eggs in a less conductive silicone mold and B. place eggs in the same metal muffin tin, but add water.

Q2: Can more evenly deep colors be achieved by keeping the egg dye warm? Last year the intensity of the dye changed significantly from the first, to last, dyed egg. It was suspected that might be related to the temperature, as the freshly made egg dye was warm, and that would cool off over time.

It is expected that the baking methods will produce better eggs than last year, and due to the more gentle conduction of the silicone, those might have better results.
It is additionally suspected that consistently warm egg dye will produce more consistent coloring results. 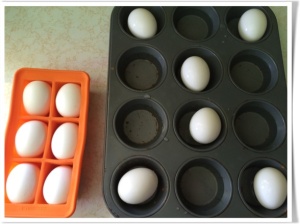 Eggs distributed in a muffin tin (with water) and in a silicone tray, prior to baking.

Egg-speriment 1: The eggs baked in the muffin tin were not as quickly chilled as those in the silicone tray, as I wanted to see how quickly hot eggs would melt into a snow bank (why not?). Despite this extra time not being chilled, and the hot dye-bath time, these eggs turned out surprisingly well compared to last year’s batch. While there were some caramelization spots on the surface of these eggs, once opened, the whites were unblemished, and the yolk was thoroughly done and was grey-ring free. 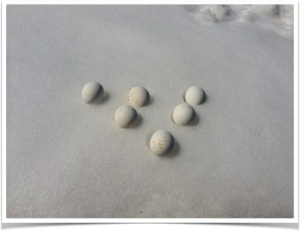 Hot eggs placed in the (still abundant) Easter snow. This really was not as exciting as hoped.

Oddly, while all the eggs were cooked at the same temperature, in the same oven, at the same time, the eggs cooked in the silicone were both underdone and showed evidence of a scorch mark. The single scorch point on the white may have been from where they eggs were in contact with the bottom of the silicone mold which was in turn touching a metal pan. A single egg from this set was not dyed, and was very underdone, while those that sat in a hot dye bath were more reasonable (although, might not be acceptable to the more egg-squimish crowd).

Thus, some additional cooking seems to occur during the dye process if using hot dyes. The amount of extra cooking can be enough to take an egg white from partially unset to set.

Overall, cooking in the muffin tin with water seems to be the better option of the two tested because it did not seem to rely on the additional heat from the dye bath to be done, and was a significant improvement than the baked eggs from last year.

Sequentially dyeing eggs with bringing the dye back up to higher temperatures between each egg, does seem to produce more consistent color that what was observed last year: 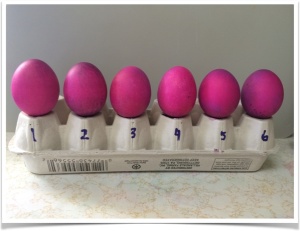 Eggs dyed in sequence with dye bath reheated after each egg.

Unfortunately for the last egg (#6) we did not hear the timer, so it was sitting in the dye longer than the rest. Given that the cooling rate was pretty consistent, with an average temperature drop of 20°F over 5 minutes, we might be able to guess that the last egg was in the dye for ~7.5 minutes based on the fact that the ending dye temperature was 30°F cooler than the starting temp (30°F / 4°F per minute = 7.5 minutes). In reality cooling curves are not linear, but all the temperatures recorded were significantly above ambient (67°F) which may make the linear approximation more justified and the local mental models of time seem to agree that somewhere between 5-10 minutes seems reasonable.

The eggs baked in the muffin tin had numerous, conspicuous brown spots on their shell surfaces (see the snow photo above), while those cooked in the silicone tray did not. However, upon opening, the evidence suggests that the silicone tray batch did not reach the same temperatures internally, which might explain the difference in external appearance.

The heated dye seemed to have some sort of insoluble material on the surface that developed thin crystalline sheets. This material seemed to show up as the food coloring (Neon Pink) was being added. It is uncertain if this was from the dye itself, or if the dye was reacting with something in the water or pan.

The dye bath changes color from the first to last egg when dying a number of them in sequence. It is unclear if there is some thermal breakdown caused by the reheating or if there is some sort of preferential uptake of some of the dye components. 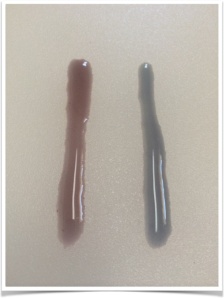 Baking eggs with water seems to work MUCH better than simply baking in a muffin tin sans water as was attempted last year, and rewarming the dye does seem to produce more consistent dye intensities.

Are the color changes in the dye bath due to temperature degradation or usage? What were the crystals (is that a repeatable phenomena or just a fluke)?