It’s blueberry season here in the UP, and having picked 5.5 lbs of them, we needed to do some science! Since I am not quite up to tackling experimental wine making yet, we chose to investigate the potential thickening power a single apple can lend to a blueberry pie.

Cook’s Illustrated recently did a post about perfecting Blueberry Pie. Tapioca, while commonly used in some parts (though not at the Primary Testing Facility…), it can creates a pasty (this not this) texture when used in the amounts needed to create a good gel or set. Their solution was to use less tapioca and add grated apple for pectin. This tester, however, finds tapioca unpleasant even at low levels (and effectively employs muffin tins for testing many pie filling variations).

Ditching the tapoica altogether, and starting with the Blueberry Pie recipe from Betty Crocker’s Cookbook

, which uses flour for thickening, we constructed 1 pie as instructed, and the other with the addition of a grated Braeburn apple. Cooks Illustrated used a Granny Smith, but this post from The Food Lab suggests that browning rate (due to inherent acidity) could predict how well apples hold their shape while baking and that Granny Smith would be one the best. Since the apple should ideally “blend in”, Braeburn was selected instead* (apparently a bit hastily, see comment section at end).

Each pie was made with pre-made crust (even though homemade is superior), in (identical) 9.5″ pyrex plates.

Bake at 400°F for 45 minutes. Cool on a rack until completely cooled.

While the pie that contained apple was the winner in terms of total number of votes, like some of our previous taste tests, it seems that those with strong affinities for a food item will be more attracted to what they have fond memories of. This is not a bad thing, but is an important factor when experimenting with recipes (note to self: don’t putz with the locally traditional Christmas cookies for parties…)

The cut Blueberry with Apple pie. 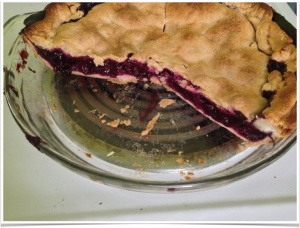 The apple did seem to modify the overall texture of the pie, where it seemed a bit more consistent (the individual berries were less noticeable). The berries seemed to hold their shapes better in the non-appled pie, and the traditional pie people liked that.

The Braeburn also added a noticeable sweetness to the pie, whereas the plain blueberry version was somewhat tart; adding ice cream to the taste testing experience could be an interesting follow-up…

The sweetness contrast of the apple and berries was more significant than expected; while the shape holding ability of the granny smith was initially a deterrent, the Braeburn* did break down fairly well.

There was a textural difference, and the apple variant cut slightly better and held its cut edge well.  As can be seen above, neither pie had major filling flow issues. While the post on pie thickeners mentioned that flour had the “flaw” of producing more opaque filling, it is doubtful the light transmission properties of pie filling will be much of a concern here in the Primary Testing Facility. Overall, the standard Betty Crocker recipe seemed to “hold up” quite well, without the additional apple-y-pectin.

*Unfortunately I did not read the entire blog post about apples before shopping (…bad scientist, no cookie…), as Braeburn was also found to hold its shape surprisingly well, which was attributed to their dense cellular structure. However, despite the obvious grated apple in the pre-cooked photo shown earlier in the post, no apple bits were discernible in the finished pie. Because the structural competency of the apple is not a major issue in this application, working with Granny Smith might be a better recommendation flavor-wise.

There was also an interesting difference in the crust of the two pies, where it looked like the crust on the apple variant was less dry/more evenly browned. While we cannot discount the fact that there might have been some pie crust variability we could not control for, another possibility is that added moisture from the apples changed how the crust baked.

The two baked pies. Left: with apple, Right: just blueberries. The difference in crust doneness/appearance is not understood.

It seems that citrus rind is a much richer source of pectin than apples; if it is indeed on the order of 30x richer in pectin, could you obtain any thickening properties from adding just a little bit of lemon or orange peel rather than adding an entire apple?

Brownie Master P’s grandmother made pies with cornstarch; how does that compare to Betty Crocker (flour-thickened) or other variants?

2 thoughts on “Blueberries: the Thickening”