We previously tested different orange liquors in our standard Sidecar cocktail recipe, but times have changed and there are new flavors on the market. Up next: O3 versus Clockwork Orange from New Holland distillery.

Last time, we scoped out Cointreau, Grand Marnier, and DeKuyper Triple Sec, for use in the sidecar cocktail, but since then we have settled on O3 (DeKuyper’s Primium Orange Liqueur) as our go-to orange liquor. However, our local stores have some space dedicated to Michigan-originated libations, and New Holland produced a Clockwork Orange liqueur, which Brownie-Master P kindly gifted us upon moving (to go “adult” or something). So, we are trying it out in some of our favorite recipes! 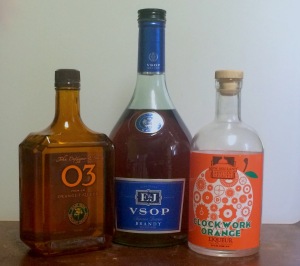 Brandy and the two orange liqueurs tested in sidecars

Combine the following in a shaker:

Sidecars made with: (left) O3 and (right) Clockwork Orange

Both were reasonable drinks, but the O3 version was better in this case as the higher sugar content helped balance the lime. A little simple syrup might go a long way to helping the Clockwork Orange version of this recipe be more balanced.

While in this case the O3 won out, it is known (via goofing off – we’ll science that later) that Clockwork Orange has the potential to work well in drinks that don’t need the sweetness for balance, so how would it fair in testing of those recipes?