This presidential election cycle we are attempting to design two theme drinks that will be consumed on election night. Last week we determined the ratio of primary ingredients. This week we tested possible methods for giving the drink a frothy head to represent Trump’s trademark hair.

Many drinks are served with a foam on top. In some cases the foam is a result of gases dissolved in the beverage (e.g. beer and soda). In other cases a stable foam such as whipped cream is added to the top. Here at Doing Science to Stuff headquarters we have on hand both a seltzer siphon and a nitrous oxide whipper, as well as some essential molecular gastronomy ingredients.

What is the best method of putting foam onto The Trump?

The seltzer siphon should make the drink fizzy and should have some foam on top while it is being dispensed, but the foam will quickly dissipate. Having never put anything other than cream into a nitrous oxide whipper, I have no idea how a non-fatty liquid will behave. However if nitrous oxide behaves anything like nitrogen in beverages such as stouts (e.g. Guinness), it could provide a nice stable foam. As for the molecular gastronomy route, that should provide a deeply unnatural stable foam, the flavor of which may need some fine tuning. 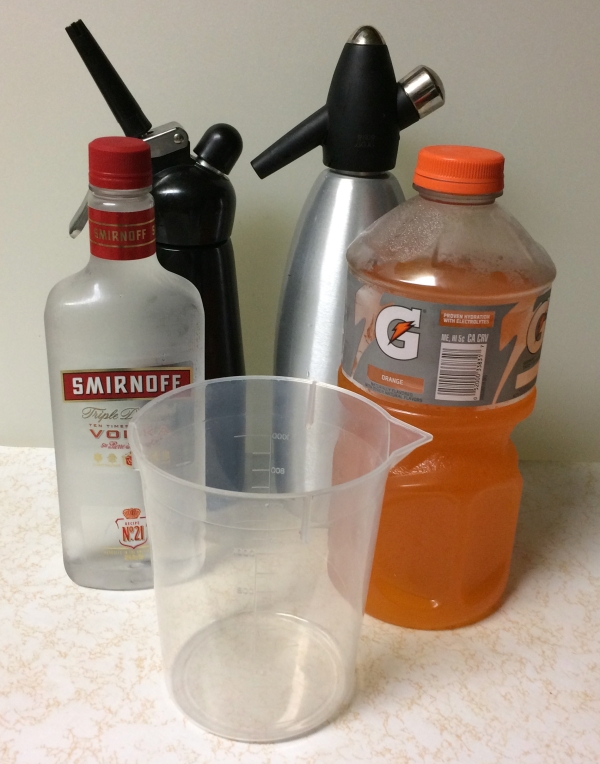 As expected, both the N2O and the CO2 variants were quite foamy when they were dispensed, but the foam quickly dissipated as shown in the videos below.

Based on the taste tests, the CO2 version was the favorite of two tasters and the second favorite of the third. So while neither of the ISIs produced the foam we were looking for, the seltzer siphon did improve the flavor, making it a good candidate for topping with the stable foam. I should note that the N2O version did have to be strained through a coffee filter to remove some contaminants from the whipper.

We didn’t take video of the stable foam as it was obviously very stable and was still disturbingly stable hours later. 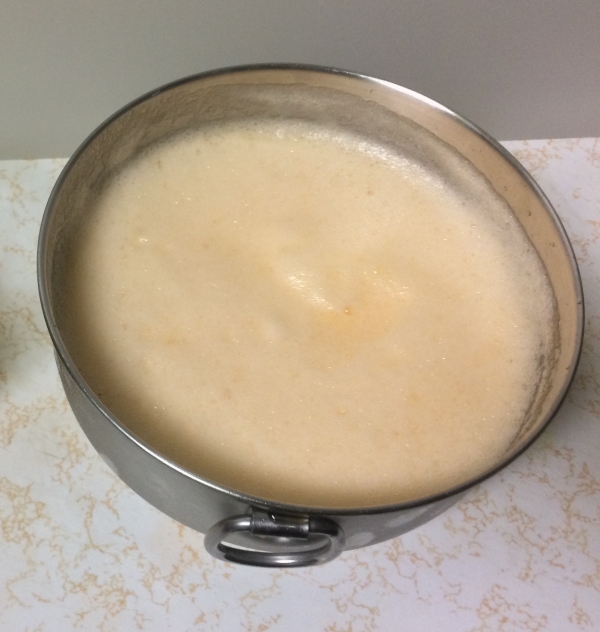 Using the deeply unnatural stabilized foam, the drink does end up with the overall effect that I had envisioned when contemplating foam to represent Trump’s trademark, and seemingly equally unnatural, hair.

The Trump with a stabilized foam.

Once the stabilized foam was added the beverage was still drinkable. The foam on its own was somewhat reminiscent of orange sherbet.

If you don’t thoroughly clean a nitrous oxide whipper, bits of curdled cream may be left behind and end up in the next thing you try to whip. CO2 actually improved the flavor of The Trump. Dissolving methyl cellulose in very cold water is very time consuming, and perhaps should have been done well in advance. Between the three taste testers we finished the full liter of CO2 augmented Trump Juice.

While neither the CO2 nor the N2O provided the desired foam for the beverage, the methyl cellulose and xanthan gum stabilized foam worked very well. Additionally, while the question was simply how to add foam to the drink we worked on last week, we found that one of the failed attempts to add foam ended up altering the flavor in a positive way.

Does the methyl cellulose need to be dissolved in very cold water or can you dissolve it then chill the water? Does it actually matter that the methyl cellulose solution be ice cold? Since beers can form somewhat stable foams when charged with CO2, which component of beer helps stabilize the foam? Since a chemically stablized foam seems to be the best way to get the foam we wanted, is there a better base for the foam than the underlying beverage itself?

2 thoughts on “Prototyping an election night drink: The Trump MKII”