In honor of National Margarita Day, we decided to do science to margaritas. We actually did this science last year, but apparently never finished this post.

Initial observation:
Here at the primary testing facility we are quite fond of True Lemon and True Lime as substitutes for fresh juice. We have also found that aging citrus juice for several hours can improve its flavor.

Expectation:
Based on previous experience, steps in recipes that call for extra work (such as freshly squeezing lime juice) tend to be important. However we’ve also found that True Lemon/Lime make very good substitutes for the real thing. So, the expectation is that freshly squeezed will be marginally better than True Lime. However, how the lime juices that are prepared ahead of time compare is unknown.

Data:
In our first attempt to run this experiment we let the lime juices rest for 6 hours before we gave up on the True Lime shipment we needed to finish the experiment. Once all of the ingredients arrived we we tried again, sadly not on National Margarita Day.  The ratios used in this experiment were found in The Thinking Drinker’s Guide To Alcohol.

As before, the second attempt started by squeezing some limes and mixing some True Lime several hours ahead of time. 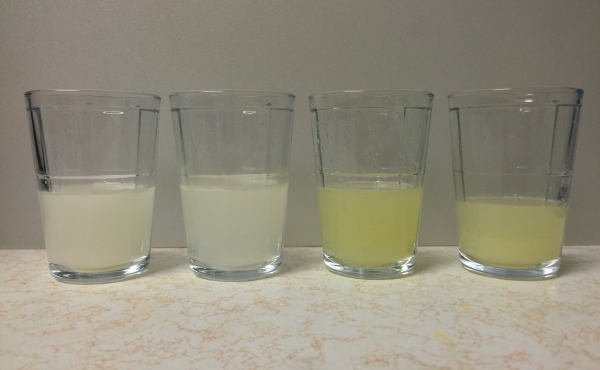 For the actual taste testing we had three volunteers identified by the letters F, A and P.  It should be noted that Taste Tester F had a rather nasty cold which may have affected their senses of taste and smell.

All four margaritas marked with charms so they can be disambiguated after tasting. Green food coloring was added to obscure the slight color difference between lime juices.

After re-chilling the margaritas, all taste testers agreed there was less difference among them, and in general the least favorite versions were less objectionable.

Conclusion:
Everyone preferred one of the aged lime fluids, but Taste Tester F’s cold likely didn’t help coming to a consensus. Additionally, Taste Tester F is also quite fond of Sidecars made with True Lime and not terribly fond of tequila, which the true lime seemed to mask quite well.

Future Questions:
What, if any purpose is served by salting the rim of the glass? Would a higher quality tequila such as Patron be less objectionable?

One thought on “Lime Juice vs The Margarita”