The Black and Tan (or Half and Half in some countries) is a fascinating beverage, and an excellent demonstration of density stratification in fluids.  Recently we have started to explore the possibility of using 3D printing to create a device that can make a Black and Tan by displacing a less dense beer with a denser one using a siphon rather than the traditional method of carefully pouring the less dense beer on top of the denser beer.

As we have previously demonstrated, fluids of different densities can easily be layered via a wave tank.  After stumbling across a video on 3D modeling software, I decided to try my hand at Fusion 360.  A few tutorials later, it seemed like designing a Black and Tan maker would be a fun thing to try.

If a denser fluid can be injected underneath another fluid, it should displace the less dense fluid and form a stable layer under it.  Therefore it should be possible to create a funnel or siphon to transport a dense fluid to the bottom of a container and have it form a stable layer under a less dense layer.  To make things more interesting, why not use a Pythagorean cup (i.e., a self starting siphon) as the basis for the siphoning? 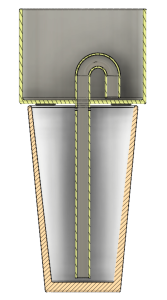 Cross section showing the Beer Siphon Mk I sitting atop a pint glass.

The 3D model for the Beer Siphon Mk I is available on Thingiverse.

One problem with using a self starting siphon to inject a fluid under another fluid is that there will be air trapped in the pipe that can prevent the siphon from starting properly.  To fix this issue, a small hole was placed in the pipe just below the main reservoir, to allow air to escape.

Being very new to both Fusion 360 and 3D printing, the first attempt was a very simple design that, in theory should work, but would probably have major defects.

The model was then sliced using Cura LulzBot Edition rotated 180º around the X axis, with support everywhere.  It was then printed on a LulzBot TAZ 6 using PLA and a 1.2mm print head.

It was obvious, just by looking at the 3D printing results, that there were large holes, especially around the edge of the reservoir and around the pipe.  Less obvious were holes along the curved section of the pipe. 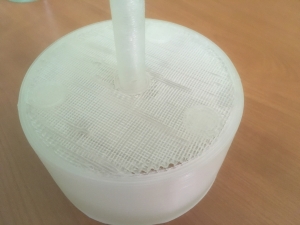 Underside of the reservoir. Holes visible along the front edge. 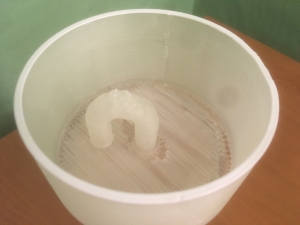 Reservoir interior and upper portion of the siphon pipe.

To fix the holes we melted a block of paraffin wax and poured it over the bottom of the reservoir to fill in the holes. We then filled a narrow glass container with melted wax and dipped the curved bit of pipe to patch its holes as well. 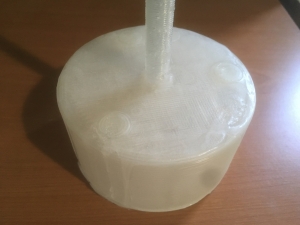 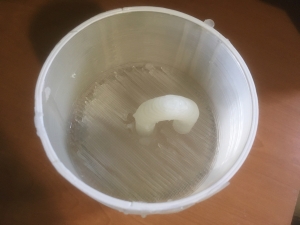 Once the holes were filled, the siphon was placed over a standard pint glass and 8 ounces of water was poured into the reservoir.  Unfortunately this revealed that the upper portion of the pipe was mostly blocked, leading to just a slow trickle over the curve in the pipe.  With just a slow trickle, a proper siphon was never started and the flow stopped as soon as the level in the reservoir reached the bottom of the curve in the pipe. 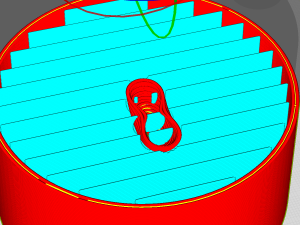 While this attempt failed to produce the desired result of being able to siphon a dense fluid under a less dense fluid, it did provide much needed insight into the nature of 3D printing.  With a few modifications we are hopeful that a fully functional Pythagorean cup can be printed.

4 thoughts on “3D Printing a Better Black and Tan, an Application of the Pythagoras Cup”