Reading through comments on social media is often infuriating due to the various cognitive biases that allow people to believe obviously false claims.  Since gamification has been used to raise awareness of other topics, why not cognitives biases?

While reading though a list of cognitive biases recently, I noticed that there were 24 in the list.  Since 24 is exactly 5²-1, I thought to myself, BINGO!  While there are certainly more cognitive biases than 24, these seemed like a good starter set. 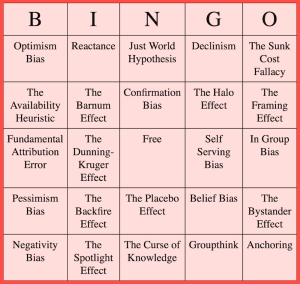 Example cognitive bias bingo board. Get your own randomized board at cognitive-bias-bingo.com.

So, if you are often frustrated with unchecked cognitive biases on social media, go to cognitive-bias-bingo.com to print your own BINGO card(s) so you can at least have a little fun while watching others being repeatedly tricked by their own brains.  Just be sure to be aware of your own biases while you do so.